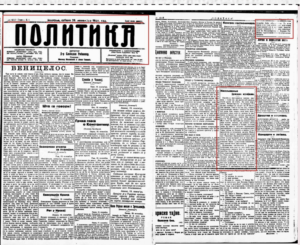 The Decree on populating the southern areas, that we already wrote about before, enters into force today. Ministry of Agrarian Reform was granted a loanof 20 million dinars for execution of the Decree. In this way, the long stalled issue was finally taken off the agenda. But, despite everything, the interest of those who wanted to populate these areas seem to have decreased, judging on very small number of applications for settlement. Also, the number of already settled persons is not so big; it is only about 4.400 persons. So far most of colonists were settled in fertile plains of Metohija, then in Kosovo, and finally in Kumanovo and Tetovo area. An attempt to populate wine growing areas around Tikves and Bregalnica (river) valley failed due to malaria, which is there very frequent and very strong. Also, areas populated with purely Arnaut element (ethnic Albanians) could not be populated. The so far settlers to southern areas already founded their agricultural cooperatives, which were foreseen in previous regulations as well. As an aid to those cooperatives the Ministry for Agrarian Reform sent recently 100.000 dinars. The aid will continue to be allocated to cooperatives in allotments of 100.000 dinars, but only under the condition if given loans are used for these purposes, foreseen in the Decree. Otherwise, aid will be stopped. The same applies for new settlers, who besides agricultural and Vardar cooperatives, have to establish agrarian communities as well, which will guarantee the payoff of spent loans to the Ministry of Agrarian Reform.
Newspaper “Politika”, Beograd, 20 novembra 1920
Downloaded from: https://euroclio.eu/wp-content/uploads/educational_resources/2014%20Once%20Upon%20a%20Time…We%20Lived%20Together/English/2.%20Agrarian%20reform%20in%20Kingdom%20of%20SCS.pdf

The story of an old lady 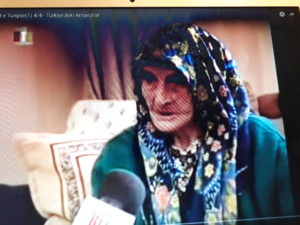 The story of an old lady named Melika Akbad who had 103 years during the i. “… I came in Turkey when i was 7 years old. We came by a ship in where my little sister was born. When we arrived in the farm which was given to us by the Turkish state we where very frightened that they thought we were “Shkije” (Slavs-Christians). We suffered a lot because we had nothing to eat. Our mother prepared for us meals only with onions without any salt and oil or plant and this was how she feed us, her three daughters. In the beginning the state gave us only a small plate of corn or plants flour. Some of the woman’s were left alone with no husbands being that they were dead or the state gave them different jobs. After a period of time we were forced to change the habitat and therefore we lived in a mosque for three years…”
https://youtu.be/mBfPZgvNxXQ

The Problem of the Displacement of Albanians from Yugoslavia

The experience of the eviction and emigration of Albanians  from Serbia before 1920 was seen as an example for later policy in Yugoslavia.  Dimitrije Bogdanovic argues that Turks and Muslim Albanians’ departure from Serbia in the nineteenth century and during the Balkan wars was spontaneous. They left because they were not confident about living under Christian rule and because they feared revenge. Between 1910 and 1920 the reduction in population was rather due to emigration of the Albanians and not losses in the wars. The numbers involved were relatively small, about 40,000 by 1921. The Turkish authorities were complicit in helping to facilitate the departure of the Albanian population. 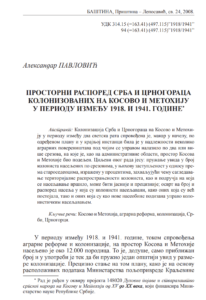 Serbian Law on the Settlement of the Southern Regions  1922

People leaving Kosovo as a result of colonization policy.